It was constructed in the Herrera style with various  attached chapels.The Communion chapel ,Baroque style, is one of the most important ones of this style.
The main fronts of the cloister are from a previous temple, dated from the 15th century, as is the bust-reliquary of Santa Felicitas. The Baroque style is found in the S.Nicolás de Bari altar and the steps that leads to the altar are made of Genova marble. 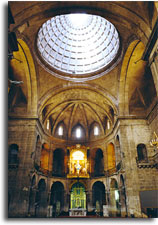 It is the oldest church made of gothic style in Alicante.It was rebuilt in the 15th  century after a big  fire. The outside main entrance  is Baroque style and inside of the church there are some Rococo decoratives details. An impressive marble front the famous italian village of Carrara is in the Chapter House.

This castle is situated on the Benacantil mountain .It has been reformed several times over the centuries due to the the different wars. It is formed by the "Torreta", the "intermediary enclosure" where the Felipe II salon is and the "lower enclosure" from the 18th c this last one.

CHURCH OF SANTIAGO APÓSTOL
15th century. Gothic, Renaissance style.
This church of gothic style shows a sanctuary of Renaissance style. It is composed of one main nave and side chapels. The main building is Gothic (Isabel style ). It has a pointed and splayed arch with archivolts adorned with plants.The High Chapel is autonomous, separated of the nave by an  arch structure.It stand out the cupola with square base decorated with caisson.
The Communion Chapel was added in the 18th century. 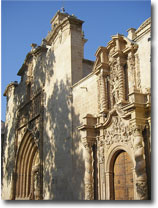 CASTLE OF SAX
12th century
An Arabic style castle which was conquered by the Castilians in 1239. Due to its location it has an strategical situation to dominate the city with wonderfull views of the region.

Dated from the 11th century, is located in the high part of the town and it is divided in two parts : the local cemetery and the place for the defence of the population from the attacks.
At the beginning it was a Muslim settlement, but after it becomes part of the Crown of Aragon.
The mayority of the remains date from this time, the period of Pedro IV.
It is not very well preserved, because of most of the castle was destroyed by two earthquakes.
This fortress has the unusual feature of housing the whole town , all of it formed part of the castle, surrounded by mountains.
The castle was bought in 1993 by the Marquises of the town and was declared a Historic-Artistic monument.