Two of the most spectacular celebrations of the entire Spanish repertoire are held along the Costa Blanca. Moros y Cristianos and the Misterio de Elche, are, with no doubt, events of maximum interest. However, there are many other festivities which cannot all be mentioned here and though they cannot match the splendour of the two we have just mentioned, they are indeed worthy of the traveller's interest, particularly if he is willing to be caught up in the colourful excitement and celebrations of the local festivities.

The Moros y Cristianos are not exclusive to Alcoy, but to the forty-six towns in the Alicante region which commemorate the Reconquest in this manner. However it is in Alcoy where the fiesta is at its best. The parades, displays and the appearance of Sant Jordi (St. George) in the papiermache castle, which is installed in the main square, are per force accompanied by the smell of gunpowder, the noise of explosions, the solemn, bright music and the fantastic colour of a lavish wardrobe, which may not be entirely faithful to the historical models. The central motif is the commemoration of the Christian victory over the troops of al-Azraq, though some scholars are inclined to think that the interpretation dates back to the times when the old Christians accused the Moriscos of collaborating with the Algerian Pirates. In fact, it does not seem that in the centuries immediately following the Reconquest, the hostilities between Muslims and Christians were so violent that it would be necessary to relive the victory over the Moors year after year in a ritual manner as if such exorcisms were necessary. The dates for the majority of the towns which celebrate the Moros y Cristianos are around the 22nd and 24th of April. 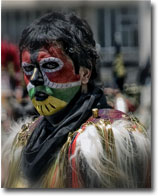 Separate mention should be made of the "Moors and Christians" celebrations in Villajoyosa during the last week of July when an animated naval battle and landing on the beach of the warring troops is carried out. All the action reaches its peak with the defence of the Castle erected in the square and the triumph of the Christian warriors over the infidels.

The Misteri d'Elx (Mystery of Elche) belongs to an entirely different atmosphere, that of the religious celebrations. During the middle of August a play about the Assumption of the virgin is put on in the El Transito Basilica in accordance with a libretto and musical score of medieval origin. Theatre and music fans will find a unique spectacle here in which the monodic Oriental heritage (most outstanding in the first act) and the polyphonic contributions of the Middle Ages are superimposed. The fact that the play is put on by non-professional actors, who rehearse throughout the year, and in some scene children are responsible for developing the very complex staging, contributes to the great interest of this mystery play which is at times, truly overwhelming. Though the key dates are the 14th and 15th of August, abbreviated performances, which last for four hours, are put on during the preceding week.

Following the same line of religious celebrations, the mystery play Auto de Los Reyes Magos of Cañada (very close to Villena) and Holy Week in Orihuela and Crevillente are also worthy of mention.

As in many areas of the Mediterranean, fire is an important element in the popular culture. The fireworks and gunpowder in all their forms are a constant presence in all of the celebrations. In Alicante, the Fogueres de Sant Joan (the bonfires of St John on the 24th of June) are similar to the fallas in Valencia and are a magnificent occasion to enjoy an evening celebration, filled with warmth and abounding joy. Javea and also some mountain towns offer the traveller the opportunity of being part of the Fire Fiestas in which certain pagan elements are clearly noticeable.

Denia is a separate case. During the second week of July a very unusual bullfight -boux del mar- takes place on the beach. The animal, in this case, is not killed, for the ritual only required that it be submerged in the water. Denia also celebrates the Day of San Jose with interesting fallas. Also noteworthy are the fallas in Benidorm.

An interesting medieval tournament is held in L'Alfas del Pi.

In many towns of the Costa Blanca and its surroundings, a deeply-rooted custom is still preserved today: the playing of Valencia handball -the trinquet- on the fronton (pelota court) or in the street (pilota de carrer) is an ancient sport which causes passions to rise. Aside from the intercity championships which are held in the spring and summer, the traveller will have the opportunity of watching a game being played in the street on Saturdays and Sundays in good weather.

Pigeon breeding is another of the curious activities that would delight an anthropologist. Tradition calls for periodical competitions to be held between pigeons, consisting in the pursuit of a female pigeon. The pigeon which managers to catch the female species obtains one of the most important trophies of the region for its owner.

We cannot finish this section without mentioning one of the most lovely and popular traditions of this land. No matter how small the town, almost every community has it own band prepared to interpret everything from pasodobles to the e music of the most renowned composers. Throughout the year it is possible in Alicante to enjoy weekly concerts which are performed free of charge in the Paseo de La Explanada, the same as in all the festivities in honour of the respective Patron Saints of the coastal and inland towns where the bands play a very important role. The contest of Habaneras which is repeated in Torrevieja every August is also a major tourist attraction.